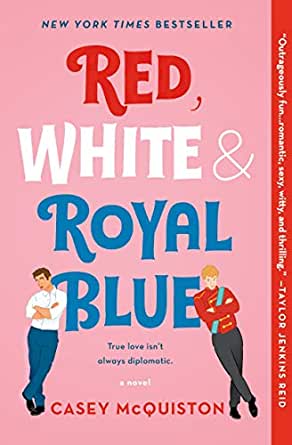 “History, huh? Bet we could make some.”

Casey McQuiston’s 2019 debut novel Red, White & Royal Blue is a breath of fresh air in the LGBT romance genre. It centres around the relationship between Alex Claremont-Diaz, First Son of the United States, and the British Prince Henry.

Alex and Henry’s love story, on opposite sides of the Atlantic and the political agenda, is, of course, a forbidden one. After creating a PR nightmare at a family event, to save face, Alex and Henry are forced into a friendship that they soon realise means more to them than they originally bargained for. Inherent homophobia within the royal family and the question of whether Alex’s mother’s re-election could be jeopardised by such a scandalous affair complicates things considerably. The themes of coming to terms with one’s sexuality and falling in love are handled quite well, as McQuiston draws from their own experiences.

The story, conveyed through Alex and Henry’s email and text message back-and-forth, is easy to read and not too harsh on the eyes – a modern response to the age-old love-letter novel. Overall, McQuiston delivers a solid debut and a romance for the ages that I have not been able to stop thinking about since I read it last year. Alex and Henry’s is a love some can only dream about come to life on paper. They are empathetic, three-dimensional protagonists, each with substantial and believable character development.

When all seems bleak in the world, a good book is almost a requirement for escape, which Red, White & Royal Blue provides. I read this book during a time when it seemed like the pandemic would never end, and it was hard to imagine a future where I got to see my friends again. But, hey, long-distance worked for Alex and Henry. Not only will this book make you belly-laugh, but it shines a ray of light on how progressive the nature of the world could be, changing for the better, one love story at a time.