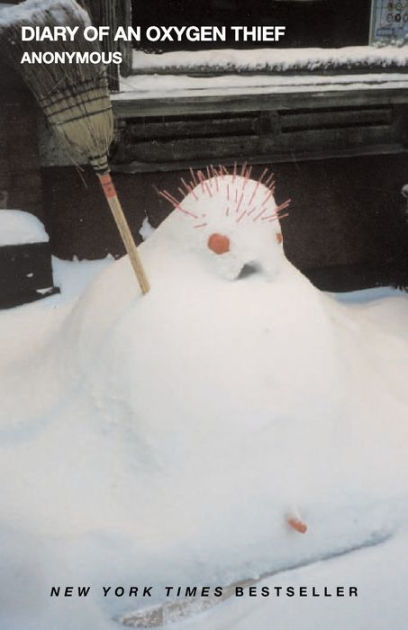 When you think of the novel’s title ‘Diary of an Oxygen Thief’, you could link it to romance, action or adventure, but you’d be sorely mistaken when coming across this book. In fact, you’ll be questioning yourself every time you think of it after reading it. Is it fiction or non-fiction? We are instead met with an emotionally abusive graphic designer in London preying on women to use and once they’ve fallen for him, he publicly humiliates them. Self-proclaimed decent looking and wealthy enough to attract women. His pattern remains the same until he takes it too far and decides to change his life around and move to the United States and refrain from any relationship with women for a decade.

However as the narrator points out “you’re not punished for your sins, you’re punished by them” and karma’s a bitch with a camera in this case. Enter the unnamed barely legal photographers assistant that he can’t seem to shake, but now it is his turn to be the prey and the humiliation of being used by the opposite sex for the entertainment of the New York photo scene of the early 2000s.

The anonymous writer is quite brilliant in using the main character’s paranoia to show his remorse for his misogynistic behaviour in his past and using a young woman to do the same to him and possibly following in his footsteps. The looming sense of punishment throughout the novel reminds you that fiction or not, what goes around comes around.

When I first began to read this book first, I was baffled. It was the first time I read something that challenged how I thought of adult relationships. It was vulgar and uncomfortable. It felt like the first adult book I had ever read. It was realistic in comparison to what I became so accustomed to in my teen years. Not the romantic, or subdued type of stories I usually read. The writer shows the realistic side of alcoholism and the effects of abuse from the point of view of the abuser. While this is uncomfortable to read and infuriating that as readers we don’t know if the book is even autobiographical or fiction as the story is plausible while still retaining realistic drama intertwined with the skill of the anonymous writer, which adds even more to the mystery of the story.

While I was uncertain about the novel because of the main character, I couldn’t help but find the book quietly brilliant. While you spend most of your time double taking over what is said by this chauvinistic narrator, it’s the mystery that you keep reading for. The need for truth by both narrator and reader is the drive that makes this novel change the outlook of what to expect in the world. If it wasn’t obvious before, the real world is no romance novel, not every person is going to be your soulmate and everyone has a villain to overcome, but there is a truth that Diary of an Oxygen Thief has been able to hit right on the head. Karma has a way of coming back to you in the end.