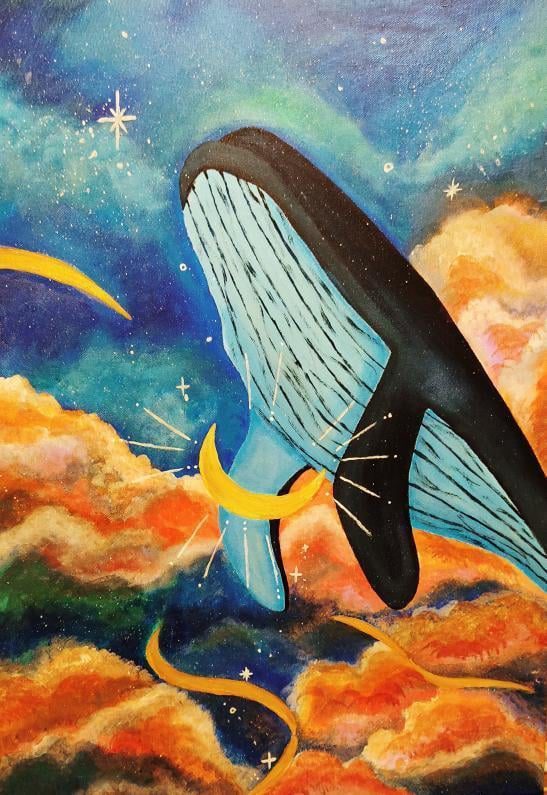 Artwork by Gabriela Victoria. Her profile is available in the Art & Photography section

The night my parents met
the city burned around them
but the crowds in the festival
were coated in flames of
green, white and gold.

Just past 25
they locked eyes, not thinking
a decade later two kids would run their lives
and grow up hearing the words–
“Call yourself a different name if you go there”
“Be careful where you wear that GAA top”
“You know what to say if asked where you live”

But it’s not as bad as what it was:
troops in the streets,
children cowering under sheets
at bombs and bullets coated in silver,
cascading through the city
red,
orange,
yellow fire,
black smoke,
– colours creating corpses,
alighting decades of grief
on both sides.

Both ‘sides’ of the stained glass window,
now accumulating its cracks
as they realise that a
child can’t take down a flag from a pole,
fold it up,
chew it between their teeth
and swallow shades of
red, white and blue
to cure their hunger.

Like a plate washed and scrubbed clean,
does the city stand better than it’s ever
been?
The taste is still rotten in the mouths of
those who were a part of the process,
the ones who lit up the oven,
fought with the knives and pierced
the meat until the blood ran everywhere.
Even the children who couldn’t reach the
kitchen counter saw the red
saw the bloodshed.

They tell those stories to us now,
They keep the stories in books,
They teach the history in schools
where a Protestant sits next to a Catholic
and befriends them,
within the city that grows around us,
from the destruction of the oil spillage
that left an unexpected array of rainbow
– a million colours
stream from the voices
of a generation
free from the past.

There was gold in our veins that night
it lightened up our faces
against a world of darkness
in our best dressed, stress laid to rest
hundreds of footsteps on pavements,
crowds instead of statistics
love engraved against walls
the city was glowing, lit up
we were the gold rush
camera flashes to capture life’s lust
and in those moments, it was enough.

Tom Boyle is currently a second-year English Literature & Creative Writing student at UCD. He is from Belfast and his poetry is inspired by events in his own life. He uses poetry to make sense of these circumstances like the changing politics in the North, life post lockdown and personal relationships.