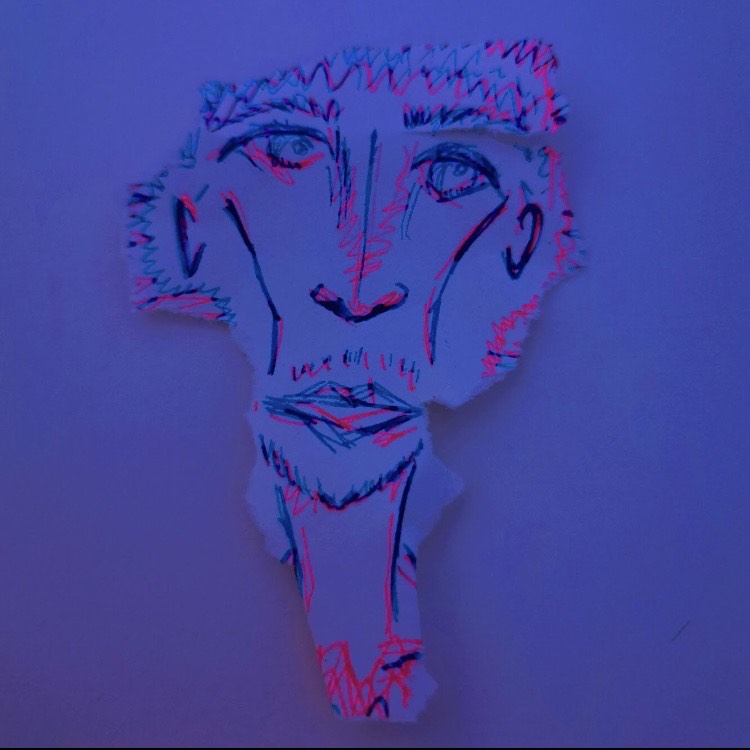 I was lost and 19 when I lost my mind. It was New Year’s Eve. No wait, not actually New Year’s Eve, no I had missed that day due to work. It was the day after. Couldn’t even get the timing right. That’s kind of how this story goes: nearly climatic. I had two friends who did this sort of thing at the time, and we found ourselves in someone else’s house. Someone I didn’t know too well, with other people I didn’t and still don’t know too well. I only ever saw the house in the dark, its bricks shaded or orange with corroded streetlight. Inside was always dim, what little brightness there was quickly faded and died as lamps were unplugged or covered. So we shuffled in line, right hands covering left, receiving little square sheets of paper kissed by lysergic acid diethylamide handed down like communion.

“Maybe I shouldn’t take mind altering drugs with people I don’t know in a place that reeks of ritual murder” was a thought that didn’t cross my mind. I took a second tab due to impatience, and a medical condition I had back then known as: being a fucking idiot. Depending on whom you ask; I still suffer from similar ailments today. One by one my blurred friends and blackened figures I didn’t know left. Whether to go give up their consciousness to the void or talk meaninglessly elsewhere it doesn’t matter but all of a sudden the confined house was empty and still looming.

Around me the hallmarks of drug induced psychosis; the occasional patter of laughter, the smell of cigarette smoke, of weed, of madness. The bathroom light always on its beige talons wrapping around the frame invading the hallway. Shadowed figures staring in mirrors or aimlessly sitting on stairs, eyes wide and minds unfocused or rambling. A couple in the kitchen talking underneath harsh white hanging lamp light. If not for the blinking and buzz of bulb, the room was still. The couple stopped their trivial chatter and stared each time I crept in dragging long aggressive drags from their thin French cigarettes, intent on their keeping secrets. I could feel the pair’s eyes burning onto the back of my head as I looked for something to do, for someone to pull me from the phycospheric spiral I found myself at the precipice of. Heat emanating from jagged irises politely asked me to fuck off. Upon entering the kitchen again, expected torn pupils had vanished. A pair of cigarettes slept on the kitchen top, not yet arriving at the void, still smoking. Light blinking, the outside world empty and black, the edge of everything was a kitchen window which leaked condensed moisture and grey smoke out into the nothingness. I found myself sitting in an empty front room. A figure resided on the black leather couches facing a clear sliding door; I couldn’t make out any features as if its face was a censored blur. I began to hear voices: unison and eclectic one second then scattered and monotone the next, shouting at me, telling me things I couldn’t make out despite their contents making sense. Logic and pattern and reason washed away because a drop that landed on my nose.

“Where did it come from?” I search the roof until it makes sense. The drop landing on my nose as it always was intended to. It made sense. Of course its journey to the beginning of its next, and from the end of its last intersected with mine. It made sense. I understand each and every detail of the drop from inception to natural suicide. I have been the drop and seen the drop before. I begin to push my new empathetic ability bigger; building on what makes sense already. Things I understand, things I’ve been, all stack like a Lego pyramid. Each piece supporting the next and supported by what came before, leading to inevitable revelations. Revelations about the building where I reside, the world I live in, the sun and the sky and the moon and floor where I lay for so long, but not anymore. Everything is white; I’m surrounded by it, white calm, infinite white, still, peaceful and empty, white. Of course I’m here. I’ve always been here. I always come back here. When my atoms are done with their miniscule excursion; their holiday in technicolour, I will return here forever again. I am connected to this place and I am everything and everyone. I am special, the pinnacle, the sum of all. If we are all inconceivable small fractions of each dower spec ever thrown into being then I am the whole; and this is my home. Everything makes sense. A leads to B; that is the nature of who we are, where we are, what we are and who we are destined to become, me. It makes sense. We are the active expression of the past and in turn the viewers of a future. Not our future, but mine. In the distance a white figure only denoted by a slight shaded outline comes into view, she has shown me this. She’s at the centre of it all, she wrote the code and set the original mass into motion. She views as I do, but she has seen more and bares to see it all, including me. Her eyes blaze into my face, showing me how everything makes sense. How what I am; forged in the same moment as stars in the sky, droplets on the roof and cigarette smoke rising towards the light. She shows me, while keeping silent, keeping a secret, her secret. Who is she? is she?, yes she has to be, she’s me. She’s always been me. We embrace and I’m subsumed into her, the last piece of knowledge left in the universe trickles in, returns home, returns to peace.

My eyes shoot open as the final droplet registers, my house of cards falls. The last question, the greatest A to the greatest B. An answer that cannot be answered no matter how much I know, how much we know. No matter how much time, how much matter returns to me, a question that topples reality no matter what state of consciousness you’re in, it cannot be answered. “What came before? What comes after?” Everything turns black.

Something cannot come of nothing. Something cannot always have been, there is always a start. If we are the expression of my equation, whose equation am I a part of? I’m outside now watching the Liffey’s water flow, stop, reverse and repeat like an infinitely looping image. Over and over it repeats as I retreat and retreat further into my paradox. If I turn around there’s nothing until I see it. Schrödinger’s reality, don’t look and nothing’s there. With my new knowledge I’ve forgotten so much and answered nothing I didn’t know before. Things that don’t matter flow into the river, they dissipate into the immaterial; my name, my friends, my family all interchangeable with everything else. I’ve forgotten how to perceive time, how to travel forward though it, I’m stuck in limbo for eternity. I laugh and cry and sob, and feel relief and dread, hope then hopelessness, I feel each for years. The electrochemistry of emotions wears thin and soon I am just there to bear witness like my white lady. I see how I created beauty and ugly, pleasure and pain, heartbreak and love. Every coin needs two sides else it become something other than a coin. I devised each and everything within my domain. I see how I spat this out billions of years ago, adhering to rules set by reality. Yin and yang, laws of conservations, equals and opposites, electrons and quarks, matter and antimatter (but on that i made a miscalculation somehow). I see the universe in its infancy before light could fly straight. Watching photons childishly bump off super charged electrons causing a kaleidoscope of colour, how beautiful it was. I remember the 380,000 years it took to mature a little, waiting for electrons to slow and attach to protons and neutrons. I remember the white where I lived at the beginning and the white where I shall return in the end and I’m not any closer to what came before or after that. Electrons calm with age, like everything else allowing photons to finally show colour. And so I spiral, trying to justify myself. I cannot have come from nothing, maybe I’m a simulation but even then the same questions reapplies itself ad nauseam. Could the answers lie in the story I made by splitting myself into decimals? In trying to find clarity I found none. After all matter returns to me I will only have the same question.

Will you calm down for just one minute my subconscious cuts though, I try to ignore it; who do you think you are? you’re not important, you’re not god. It continues, and I listen, you’re certainly not infinite, you will die; statically in your kitchen and very very unceremoniously. You will be forgotten and you will find no answers. Listen up because this is the true nature of it all; pointlessness. Whether or not you came from nothing or if you’re just another blip on the boundless infinite you’ll never fucking know, even if someone else in a different year and maybe not even on this planet does. Buckle up asshole, breathe, your narcissism cannot stop time, it will pass. You will heal and hurt again. If you focus too much on the destination you’ll miss the journey; and when the destination’s nothing, the journey’s everything. So wait a while, the desire to sleep will return and when it does you will too. Oh and tell your mother you love her more often.

Luke McMenamin was born; much to the dismay of all those who would come to know him, in 1999. It took him and those around him only nine years to realize his malformed brain was dyslexic. Five years after that he decided to become a writer, these are his attempts at that.