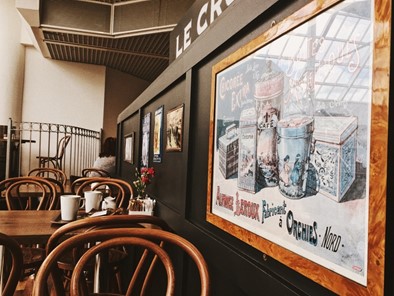 Takes one to know one

Since starting my job as a waiter earlier this summer, my social net has broadened quite widely and randomly. I have stumbled into friendship groups with which I had wanted to mix for many of the fifteen years I have now lived in southwest England. These are people who had always been the most noticeably outgoing, the one who wore the most interesting clothes, assembled in the brightest and most dazzling social collectives – and now, at long last, I finally have an ‘in’ with these people.

I have a reason to be in the room, even if I don’t quite know what I have done to befriend them besides work at the restaurant where many of them happened to hang out. I am bewildered and grateful for this happy accident.

I have also met a handful of completely new people, too — one of them being a friendly no-bullshit lesbian. And yes, I recognise that “lesbian” has become an increasingly unfashionable moniker, but let me say that this is the noun under which she herself identifies. She is a little older than me, and talks rapidly and selectively. Her shoulder-length chestnut hair wafts behind her ears when she walks, for she moves in much the same way she does everything else: very quickly.

I respect the self-appointed time pressure under which she conducts her affairs, as it encourages those around her to keep pace. She is a high-energy person and expects the same of those around her.

I see in her, also, the particularly Australian quality of calling a spade a spade.  Being Welsh, I feel she is just enough of an outsider to refuse the English national pastime of tiptoeing around an issue with passive-aggressiveness. She and I will both to resort to a hearty “fuck sake!” in favour of an Excuse me, would you kindly. Yet in our quickly established affinity, I did not at first recognise her queerness: she had to volunteer that herself.

Of course, it was her rejection of heterosexuality that made me like her even more, for the population of my small town is overwhelmingly straight. Such is the rarity of encountering others of my ilk, I am somewhat hardwired to take a liking to those who prefer the heady splendours of their own sex. Essentially, if you aren’t in the family way, I am biased toward liking you — I like that which I am least often exposed to, rather as one takes a liking to caviar because it is not always readily available. Less is certainly more.

It was quite early in our interactions that she called me out for acting gay. The comment was not made to shun or shame, rather an exercise in the playful teasing that is so commonly practised by any workforce in hospitality: bonding through bullying, all very well-meaning. She reportedly knew I was gay soon after meeting, that she already saw me “mincing about the place” and took note of my emphatic hand gestures, for I tend to physically spell things out as I talk.

There wasn’t much more said on the matter beyond that quick comment, but I was a little taken aback by her observations, for I had long flown under the gaydar up to this point.

For the majority of my young adult life, I have been told that I don’t look very gay and consequently came to understand the rigidity in which stereotypes are applied to gay men — and how inflexible they are as identity markers. Because I don’t wear tight t-shirts, tucked into even tighter shorts, or speckle my cheeks with glitter or flap my wrists and giggle, I have mostly been able to proceed with a ‘straight-acting’ clearance pass. I am not enough of an affront to conventional standards of masculinity for anyone to call me out on how I stand or talk.

I don’t wax my eyebrows and I don’t wear concealer, so I’m not characteristically ‘fem’; I’m not fit enough to be a Jock and my metabolism is too high for me to fill out sufficiently to identify as an Otter. While I do shave my chest, I’m not skinny enough to be a Twink and so I sit in the inoffensively mundane tick-box known within the gay culture known as Clean-Cut. I floss my teeth and wear clean trainers. I am two steps removed from being pretty, but I am striking enough for guys to message me with the opening line, Hello, handsome.

Such is the bluntness with which these categories of male queerness are defined and applied, the majority of people aren’t able to discern their specific features. They are, for the most part, conveniently basic identifiers that only those within the minority — the ones to whom these tick-boxes are applied — can challenge their shortcomings. And so, my Welsh friend was able to pick up on enough social cues to determine that my use of sign language in conversation was more than usually flamboyant; that I was, in fact, another just like her.

This was new to me. I haven’t ever been outed before, really, as I will often announce my gayness to correct the presumptive questioning of strangers as to whether I have a girlfriend. Most people say little about it, all the same, because people today are so nonplussed by gay people as to say nothing about it. I nevertheless find this hard to believe as a member of the infinitesimal queer  population within my small town. I believe we are still enough of a social unicorn down here for our lifestyle choices to raise eyebrows.

Perhaps, then, the walls of these tick-boxes demarcating gay culture are so high that outsiders are unable to peer over them and see the small community trapped within them. I like to think my lesbian friend is so familiar with the sight of faces glancing quizzically at her from above, eyes squinted in hungry uncertainty, that her queer spidey-senses have been sharpened to identify my own queerness. After all, she picked up on my apparent “mincing about” where nobody else in our vicinity had.

I believe my friend’s decision to quietly out me was an affirmation that it takes one to know one. If it was going to be anyone, I’m glad it was her.

Born in Western Australia, Liam Heitmann-Ryce is a 23-year-old Creative Writing graduate currently residing in the southwest of England. He is dedicated to platforming LGBT+ voices and queer experiences through his stories and interview features. Outside of his writing practice, he has passionate interests in classical music and wishes to one day work for a symphony orchestra.