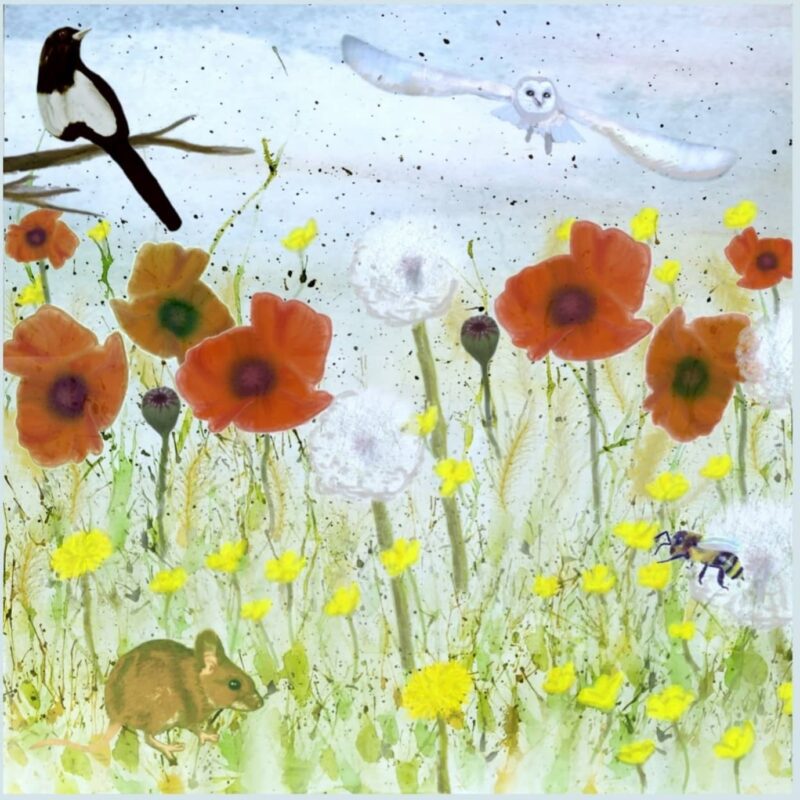 Artwork by Rachel Druitt. Her full profile is available in the Art & Photography section.

“Grown-ups never understand anything by themselves, and it is tiresome for children to be always and forever explaining things to them.” – Antoine de Saint-Exupéry

The small boy is running circles around me. He speaks in the way all children speak, in one long, never-ending sentence separated only by commas, or whereupon he runs out of breath. There’s a brief pause, a sharp inhale, and off he goes again.

“Well, you see, the sun shines on the water in the air…”

“Booo-ring. Why is the grass green?”
I laugh at his casual dismissal of my answer and roll my eyes.

“Why can’t it be purple instead? I like purple better.”

“Well then, it can be whatever colour you want it to be.”

He nods at this, then falls silent for a moment, switching his attention to the leaves crunching underfoot. He stomps on a dry-looking one, only for it to squish under his wellies with no hint of a crackle. He looks slightly disappointed, but unperturbed.

“Are there more birds in the sky than snails on the ground?”
Wow. Now we’re getting specific. Where did that one come from? I don’t remember my third class Brain Teasers maths books ever asking that.

“I’d say there are more snails. Why do you ask?”

“Dunno. Just thought of birds. How do birds fly?”

“With their wings, of course!”

“Ooh! How do aeroplanes fly?”

“They have wings too, but they’re cheating because they have
engines that propel them high into the air.”

“How do robots work, then?”

“Hmm, good question. They need an electric energy source, and their brain is
like a computer with a program in it telling it what to do.”

“Could robots be programmed to be friends with humans?”

“I guess so. I don’t really know much about robots.”

He takes this string of thought and runs with it like a kite.
“Why do some people need glasses? If we can make robots and computers, why can’t we just fix people’s eyes?”

“That’s a very good question! Maybe we just haven’t joined the dots yet.”

“I think they look cool. I’d like a pair of glasses, wouldn’t you?”
Children come out with the funniest things, I think to myself, marvelling at his curiosity and simultaneously regretting my own lack of knowledge of anything.

“There’s a girl in my school who has a wheelchair,” he says, seemingly at random, though in his mind I’m sure there’s a perfectly reasonable link between that and glasses.

“Yeah. I just think she’s cool. She has racing stripes painted on the wheels, and she can make it go backwards and everything.”

I smile and laugh at this response, and agree, that is cool. It also occurred to him that before her arrival, the school didn’t have accessibility ramps, which he found odd. As do I.

“We watched a video today in SPHE and there was a boy with dark skin in it. Do you know why his skin is dark when ours is light?”

“Well, people from different places have different skin tones, and
that’s a normal thing, in fact it’s something to be celebrated.”

“Why did he get treated differently? That’s not fair.”

He’s right, it isn’t fair. I have no concise answer to this question, and I’m unsure of how to discuss colonialism and its lingering effects with a seven-year-old.

“Well, it’s an old and outdated belief that people who look like
us were better. Some people nowadays use it as an excuse to
hide from what they don’t know, but that’s wrong, and it’s up
to us all to change that, because everyone should be equal.”

“You’re right. I don’t understand how someone could be mean to someone else because of their skin tone. Why does it matter what someone looks like?”

Children come out with the profoundest things sometimes, I think, revising my previous thought. The world would be much nicer if adults retained the altruism of children.
He leaps over a puddle, barely making it to the other side. He’s also moved on from this thought and leap-frogged to the next one.

“Can we have ice-cream for dinner?”

“Absolutely not, your mum would kill me!”

“How about pizza? Pleeease? Can we have ice cream after that?”

I am a singer, poet, and general creative. I am fascinated by languages (of which I happen to speak four), rhythms, and syntax, which is reflected in my work. I particularly enjoy poetry and prose of the unconventional sort.