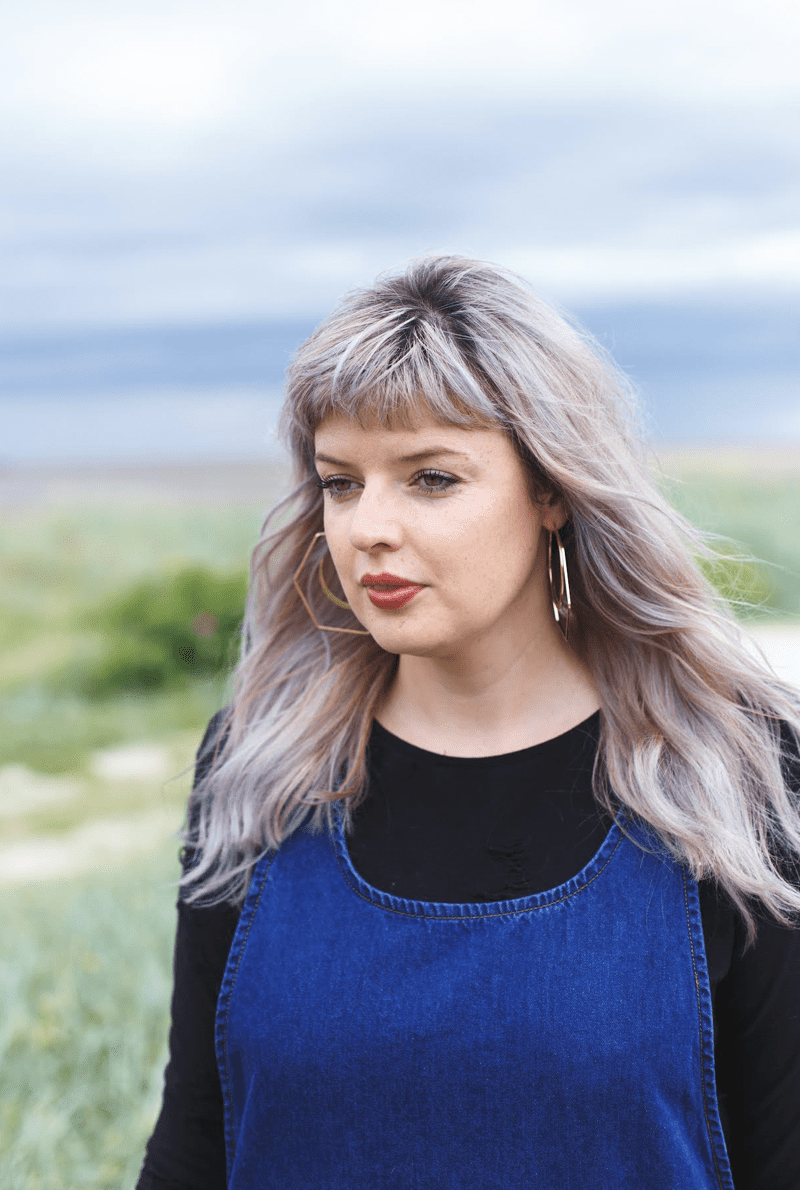 Sarah Maria Griffin is an Irish writer, poet, and creator of zines. Sarah has written fiction in her novels Spare and Found Parts, and Other Words for Smoke, non fiction in her memoir Not Lost about her time living abroad in San Francisco, and creates zines on a wide variety of topics. Her novel Other Words for Smoke was voted the Teen and YA book of the year in the 2019 An Post Irish Book Awards. She lives just outside Dublin with her husband Ceri, cat Mo, and dog Weaver.

Conducted and Edited by Katie Farrell

Editors note: Due to scheduling conflicts Sarah and I were unfortunately unable to meet in person so this interview was conducted by email.

So first off, obviously thank you so much for agreeing to be interviewed by us, it really means a lot to us all. It’s actually really cool to have you because while I was prepping (reading the old interviews to steal questions) I noticed that you’re mentioned in our very first interview with Deirdre Sullivan. As well as that UCD students are actually studying Spare and Found Parts this year! You come up in a class called “Irish Fiction after 2010”.

Without further ado here are my questions for you. They’re a combination of things we’re asking everyone, things I’ve stolen from past interviews, and I also asked friends, family and my partner for suggestions so it’s a very collaborative list of questions.

Was there a specific moment where you decided that writing was what you wanted to do, or did you kind of fall into it naturally?

There was no specific moment, per se, rather a sense for the vast majority of my life that it was something I had to do. An urgency. It was something I did obsessively as a child and teenager – I am aware that’s not an uncommon thing for children and teens to do, mind you – but as I got older, with absolutely no clue of how to get ‘into’ writing as a job, that sureness really solidified into a certainty, and that certainty turned into ambition. Even if I’d never published, I would have still read, and written, as much as I could, at every stolen moment I could find, and often when I was supposed to be doing other things, instead.

What’s the coolest opportunity you’ve had because of writing being your job?

I’ve been really lucky, and have found myself in some truly bananas situations.

You’re varied in terms of what you write and the formats you publish across. You’ve put out fiction in your novels, non fiction in your memoir. You’ve written about video games, and roses amongst other things in your zines. You talk nostalgia in your podcast. If someone told you tomorrow you could only produce one kind of content and put it out through one format which one would it be? It can be anything you like, doesn’t need to be something I’ve mentioned there.

I would probably say fiction, given that it is what I do the most of, and love the most. But then, when the person who made the ‘Just One Thing’ rule wasn’t looking, I’d make zines on the sly.

Do you have a favourite part of the writing process? I know you do a lot of your drafts longhand on actual paper. My wrist could never. I genuinely think I did something to it doing as much writing as I did in my leaving cert because it hasn’t been the same since.

I have in fact given myself a physical injury from each fiction project I’ve finished, normally in the shoulder area, so handwriting is… weirdly metal, given how gentle a practice it is. My favourite part is just past the beginning, when the story is just standing up on little Bambi legs, all wobbly, but has all the potential in the world. It’s a really vulnerable, private time in the work, too, which is lovely. There’s a sort of intimacy to it, when you’re just getting to know the shape of the thing.

Writers have weird Google search histories. I wish I could say that my knowledge of horse reproduction was for something I’m writing, but honestly, it’s from coming across a thoroughbred breeder on Tiktok. What are the most interesting things you’ve had to look up, or that you’ve learned from doing research for a piece?

Weirdly, the title of Other Words For Smoke was a Google search. I was hitting the limits of my vocabulary when writing the house fire sequences, and then, there it was. One of my forthcoming works is about florists, and I learned that you can make closed up buds of flowers bloom quickly if you expose them to overripe bananas. In terms of my current search history, I’m currently looking at a lot of AI generated images of Biblically accurate angels, both through searching and using apps. My TikTok algorithm is deranged, frankly, but I wouldn’t have it any other way.

Submissions are open to everyone whether published before or not at New Word Order, but one thing we’re super interested in is new work. So what new writing, new music, new tv, new whatever form of content you choose, are you really enjoying at the moment? New both in the sense of recently released but also new to you!

I’m currently reading How to Build A Boat, by Elaine Feeney, which is out next year and is absolutely stunning. Her voice is just so clear, so distinct, you can really tell she’s a poet in how her prose feels. I’m also reading Chen Chen’s Your Emergency Contact Has Experienced An Emergency, in pieces, which is how I like to read poetry, dipping into it. On repeat is the new (well, last month?) Carly Rae Jepson & Rufus Wainwright song, The Loneliest Time. I’m playing Shadow’s Over Loathing, a really clever, funny, huge video game set in the prohibition era, with Eldritch undertones. My podcast of the moment is Normal Gossip, which looks at… gossip – but gossip about people you will never meet. High drama, low stakes. I look forward to new episodes with real, heightened excitement, which is a rare feeling.

If you’d like a moment to talk about how cool your pets are please feel free to do so. I will be pinching photos of them from your Instagram to add to this. Everybody loves to hear about pets.

Big Mo is a ten year old cat, rescued from the SFSPCA in San Francisco when he was around the size of a can of Coke. He sleeps on my neck and spends much of the day trying to lie on my keyboard, or notebook, or just exactly in front of my body. He has yellow eyes the size of coins and a deep, violent rivalry with the neighbour’s cat, Huevo. He feels ambivalent towards his two year old housemate, Weaver, who is a mysterious mixed breed wearing a Border Collie’s outfit. She likes small bits of ham and being told she is beautiful, and trying to herd Big Mo like a sheep.

Your herbs, spices, condiments cabinet is the greatest envy of my life. Tell me your current favourite thing to put on food, and what you like to put it on.

The cabinet of curiosities! I collect little spices and herbs and sauces when I travel, I also cook a lot, so it’s my pride and joy. There’s a seasoning mix I picked up in a little corner shop in New York over the summer, which is called Slap Ya Mama. It’s a creole-ish mix of things, cayenne and paprika and about half a dozen other bits. It’s lovely if you use it to season roast potatoes, or chips, but it can be used in pretty much everything. I also use Everything But The Bagel seasoning from Trader Joe’s an inordinate amount, which contains sesame seeds and poppy seeds and garlic and onion and salt, and just gives eggs on toast, or cheese on toast, or soup, or anything you use it on a sort of, lift. Further, Ger’s Hot Honey is really special, too. I really need to stop, I could keep going, but I won’t!

As cliché as the question is, is there anything, any advice, any thoughts, any anything, that you would like to say to the people reading this? The majority are likely to be students, likely aspiring writers of creatives of some description. Is there anything you’d really have liked to hear when you were starting out at writing?

This absolutely might sound incredibly basic, so please forgive me, but it’s something I remind myself of every day. You just have to finish something. A sentence. A paragraph. A page. They make up a book, eventually. I know what it’s like to want to write, or be a writer, without having a finished thing. I know what that amorphous, weird period of hunger is like. The answer to that ambition is a finished work. Once you have the work, then you can get moving. So finish it. Finish the book. You absolutely can do it. Slowly, or quickly, or whatever way feels right for you. In the notes app on your phone, in an email thread to yourself, in A4 foolscap pages. Just finish the book. I had a small sticker for years on my ancient, long dead laptop, above the screen, that my friend made me while she was an art student. It just read, ‘WRITE THE THING.’ So that is my advice. Write the thing. Finish the thing.

Finally, do you have any big exciting things in the works? I know you recently submitted a draft of something. What, that you are able to tell us about, is coming next from you?A

I do, but I am not allowed talk about it yet. I have spent the last couple of years working on two things, and I promise, I’ll be allowed talk about them so soon. But for now I am living happily with the secret. How rare to get to keep a good secret, you know? 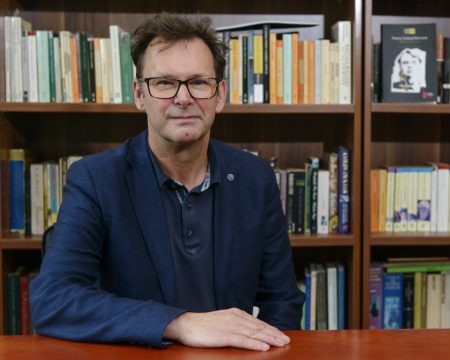 Ian Davidson is an accomplished poet, author, and essayist. An expert in modern and contemporary poetics, he is currently a professor in University College Dublin’s..
Read More