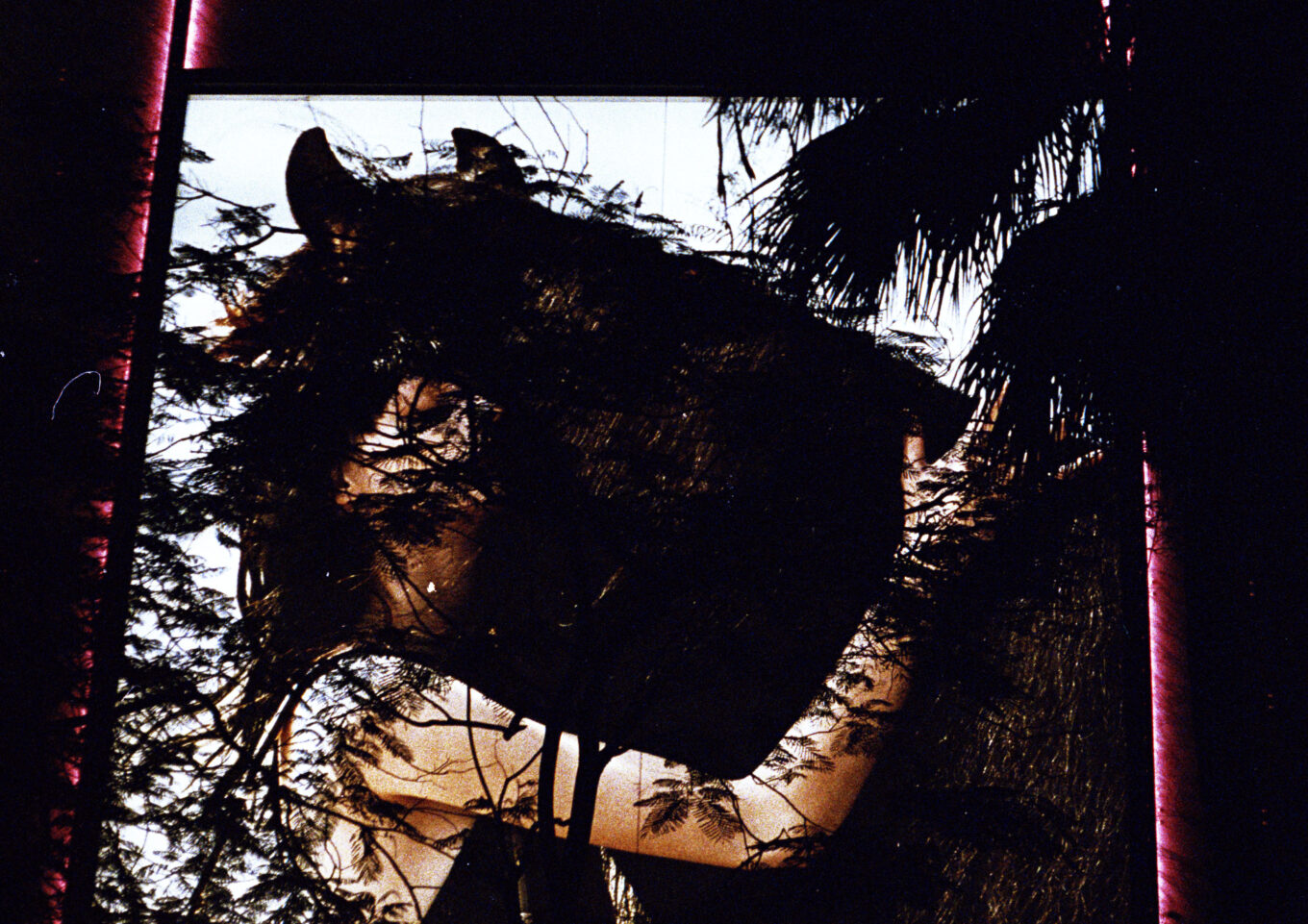 If you meander along the cliff edge, past buckled branches of coral trees and blackened leafless brush, you’ll reach a view so fine above the pier you can see far beyond the sleeping hips of mountainland. Try and climb the brittle fence, feel the wood hollowed and salt-grated so smooth and slim in your grip, you can almost oar your way into the blue. Lean far enough over, above the snake holes and foxtails, and you can lick the wind off the sea.

When my sisters and I were children, my mother would buy us cakes that looked like the beach. Gelatinous waves rippled by a clever knife were layered on top of brown sugar sands, populated with stones of pop rocks and whittled fondant conch shells. We’d circumnavigate our forefingers around the base when our mother’s back was turned, sweeping away the tropical flowers so sugary and sweet. As I sit here in the January gloom, I think how offseason those pastries are, for today, the water is a blanket of buffed grey and my tastebuds feel tacky and ready for wetting. I reach my palms out to smooth the choppy waves and steady the fisherman’s snug boats so I can take the wintered shoreline in my full embrace.

I like to arrive here early in the morning when the old men walk their dogs. The mist hovers underneath palm fronds in a hushed canopy except for the crunch, crunch of the gravel footpath. We nod at one another, the old men and me, and their dogs shuffle past with wet noses to the ground. I have come here every morning for a year now. I walk the same path to the same point to watch the same scene. It has become mine. The grass I cross to reach the path is gently bowed and arrowed towards my perch. Even the rail of the fence I stand on sags ever so slightly in the centre. I’ve made my mark. I’ve left my trace if you can call it that. I’m proud of it. It’s proof I’m remembered.

I like to leave my mark on things that aren’t mine. Like carving letters into the laminate windows of the city buses, or plucking the last few overhanging magnolias from Mrs Ayala’s garden. Nothing drastic, but still.

So you can understand why I knew, almost immediately, when someone had been there. At my ledge. The air smelled different. It smelled like burnt coffee and wet nylon. I patrolled the area, waiting for this amorphous intruder to skulk in wearing a grotesque hazmat of sticky raincoat and gripping a pock-marked styrofoam of Folger’s black. I dislike styrofoam. I don’t like how it squeaks and hushes at you when it twists in your hand and flakes under your fingernails. Hush hush you crumble too easily, you make such a mess! I don’t like drinking out of paper cups, either. My front teeth catch on the waxed lip and the base is always soggy. I’m not sure. But it’s too temporary. Too easily drowned. l drink out of porcelain, where I can keep the warmth in my hands, and when I put my ear to the swell, I can hear the glaze tapping away. Tap, tap, tap, tap, like the way the first drops of rain would sound as they met the blacktop of my old schoolyard. Tap, the filmy surface turns from grey to black. Tap, there’s an emerald on the green bench. Tap, a diamond on my shoulder. And there’s that heady smell of wet and windy iron. Rain in Los Angeles is sacred. It’s fleeting. And it’s the one time we’re underwater.

The intruder did not materialize then and wouldn’t until at least two Sundays later, when I had brought my journal, and wanted to be alone. I knew it was them, because I heard the nylon stick and metal thermos clink. Tap, my inky ‘o’ turned into a blotch and tap, a tear swam down my nose and tap, someone touched me.

If you knew me, you’d know that I’m a solitary person. I find the narrow spaces and fill them up so there isn’t room for anyone else. The perch is one of these places. It’s the windiest spot, so naturally, terrible for selfies; the most damaged and dangerous thread of fence, and far away from the fancy restaurants and cocktail bars that line the outlook. It’s also next door to the public toilets whose clientele are bleary-eyed tramps who snooze on rucksacks and collect bottles from the metal trash cans. No one comes here for yoga or picnics. No one stays here to read. Other than the old men with dogs, I’m the only one that likes it here. For me, its allure lies in its total undesirability.

On rainy days, especially, I am happily sullen and mute. This is why I write in my journal, to drain my weekly runoff back into the sea. It rises and falls in wave fashion and is all kept here in my tiny white book. I like to write against the fence. I work hard here to keep the pages from shuddering in the gale, otherwise, they flap wildly like the nattering seagulls overhead. They’ll fling themselves into the current, waiting to be strung taut to the sailboat miniatures that balance on the horizon.

The tap from the hand came again, only harder, and twice. I shut my journal and secure it with an elastic band. I don’t say anything, and I slowly turn around.

He’s young and very thin. Everything about him reminds me of wood. His skin is smooth and nut-coloured and he’s so tall he stoops down to meet me at eye level. His smile is a ripple of tree rings but surely they can’t be because he looks even younger when he does.

“Can I stand beside you?” he asks, “I’d like to get a shot of this view.” He points towards the sea, barely visible now a thick fog has settled.

I nod quickly and shift to the left. Everything moves with him. The long, branch-like arms, the beaded bracelets on his wrist, the willowy jeaned legs he shifts his weight on. I can smell the damp navy of his raincoat, and watch quietly as he hoists a tatty messenger bag up on to the fence. Inside this he pulls out a black camera bag, the word Nikon stitched thickly in white thread. Unzipping it slowly, he tenderly lifts out a camera; a dull silver thing with a complicated looking lens. He tests some buttons on the side of the digital screen. I assume he’s adjusting the settings but I’m no camera expert. I watch silently from the corner of my eye, breathing in the vapour of the rain that’s begun to quietly drizzle and settle in our hair.

“So you like this view too?” he asks. He’s put the camera to his eye, squinting with the other as he adjusts the lens.

He smiles without looking at me, still adjusting the lens.

I thumb the elastic band on my journal. I’m not used to the company.

“What are you taking a photo of?” I almost whisper.

“All of this,” he says, spreading his tree arms wide. He smiles again, this time looking at me. I look at his hands.

“I like to get this place when nobody’s here,” he says, almost to himself.

I pretend to look at the seagulls circling overhead, the squirrels squabbling in the dirt as he takes photos of the sea. I’ve been holding my breath ever since he’s arrived. I decide to take slow steps down the length of the fence. The further I walk, the more my feet are wedded to the gravel, and the air I breathe becomes less shallow. I walk so far that he becomes a smudge of blue against grey, and the snap snap of his camera shutter is muffled and lost to the wind.

Michael’s first novel The Cry of Wolves has recently been published by Editions Textes Gais in Paris. He had twice been shortlisted for the Hennessy Literary Awards. His stories have been published in The Sunday Tribune, The Irish Times and broadcast on DSC Radio. In 2015 he competed an MA in Creative Writing in University College Dublin.