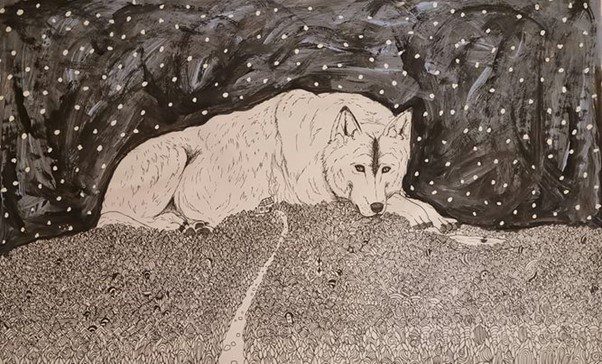 Artwork by Hanna Biju. Her full profile can be seen in the Art & Photography section.

He had wandered into the bookshop for a browse after work. Had thought he might buy her a book to take her mind off things. She liked murder mysteries and detective stories but, when faced with the wall of choice in front of him, he couldn’t make a decision on what to buy. Chances were he would get something she had already read, so he decided against it. As he meandered out of the shop he came across a display table covered with jigsaws. There were myriad scenes. A still life of flowers in a vase, a cityscape of the Brooklyn Bridge in New York and a landscape that could have been a replica of a Constable painting. But one in particular caught his eye.

The picture on the box was of the Grand Canal – the view from the Accademia Bridge down past the Church of Santa Maria della Salute. This had been their favourite view when they visited all those years ago. She loved Venice.  Loved the theatricality of the place. All the narrow calles leading off squares and sometimes leading nowhere at all. A few times they had encountered a dead end at the water’s edge and laughing, had turned back.  They had been in no hurry then. Had all the time in the world.

He bought the jigsaw and gave it to her when he got home.

‘I thought you’d like the picture,’ he’d said. ‘Maybe it’s something we could do together while you’re having your treatment?’

She smiled weakly at him and said, ‘I thought you didn’t like jigsaws?’

He went with her every Wednesday and waited while she received her chemotherapy cocktail. She’d told him many times that he didn’t have to be there, but every moment spent with her now was precious.

He even invested in a jigsaw board to transport it around with him. She had laughed heartily at that. Admired his determination.

They became the talk of the place. ‘The couple with the jigsaw.’ Every Wednesday he would set the board out across their two chairs and they would mull over the pieces together. They had started, as they always did, with the edges first. The bright blue sky at the top of the scene, the ochre buildings around the edges and the darker blue of the Grand Canal at the bottom. It was a 5,000 piece jigsaw and he had thought it would take forever to complete. But she had taken a keen interest in it and, as the weeks went by, seemed more and more determined to finish it. Then one Wednesday she sat back and sighed, ‘All done’. And it was, except for one piece that had somehow escaped.  It was the last piece of the sky. He hunted for it everywhere, under their chairs and around the floor, but couldn’t find it.

‘Leave it,’ she had said to him. ‘It will turn up eventually.’

When it was all over he got a call from one of the nurses in the Oncology Department to say that a cleaner had found the missing piece stuck down the side of one of the chairs.

He thanked her for the call and asked her to post the missing piece out to him as he couldn’t face going back there again.

When it arrived he put the piece in his wallet. It resides there as a constant reminder of her and the piece of him that he has lost forever.

I have a BA degree in English and Philosophy from UCD and a Barrister of Law degree from the King’s Inns. I am a member of a small online creative writing group of like-minded people who meet weekly to write and critique each other’s work.