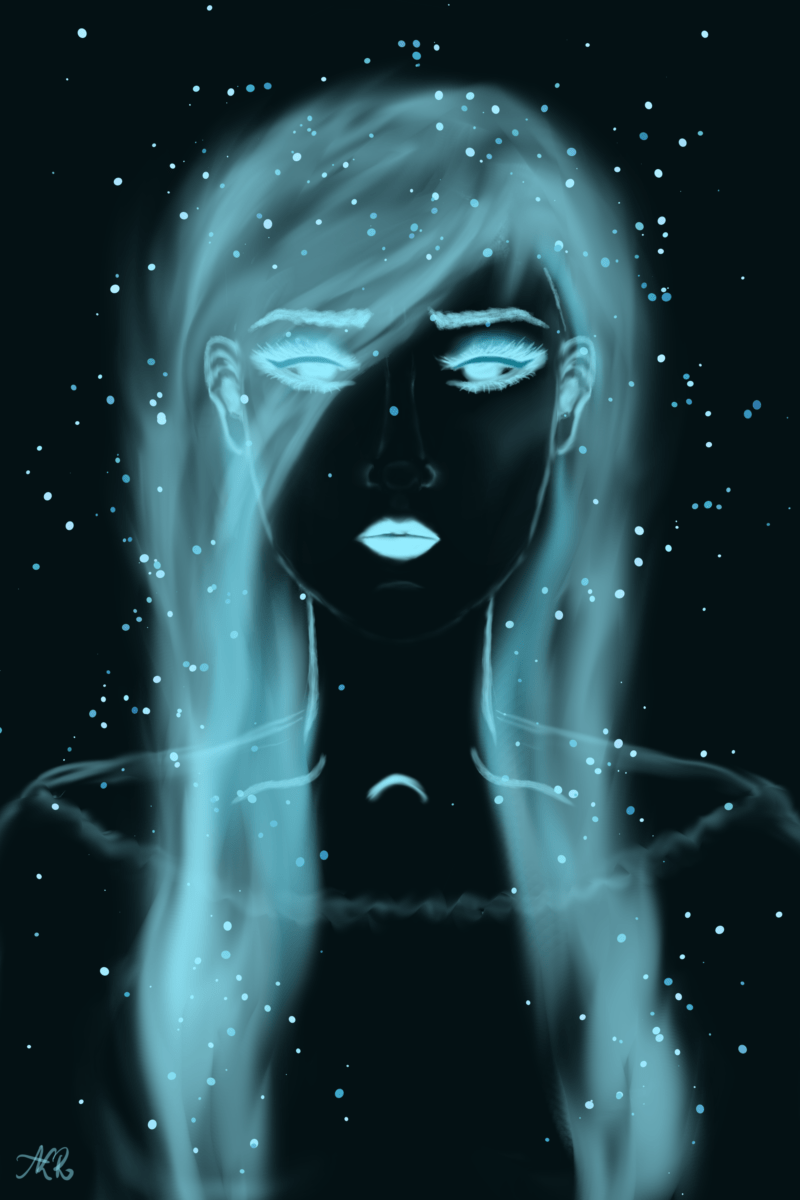 I wake again. The cracks in the blinds still leaking a smooth navy into the bedroom and I know I must have only dozed off for a maximum of an hour. It’s the crying that does it. The short, sharp bursts make her sound more like a prototype than the real thing and I think about how I took the pathetic low dog like whimpering for granted. I think that I hate her and then I hate myself for thinking this.

I let her cry and then shuffle around the bed as if I’m in a restless sleep and watch his face beside mine to see if he will wake up and I shout at him silently. The house feels so loud that I feel like laughing at his ability to continue to sleep and sleep and sleep and that surely he is doing this on purpose. His eyelids flutter mockingly, gentle, like fragile wings, unashamedly at peace. There are times, in the mornings, where he yawns and stretches and says to me in complete and total seriousness that he

had a terrible sleep. Kept waking up.

And I feel like upending the table, his mug of weak white tea smashing and landing in its own puddle, the matching breakfast bowls flying across the kitchen, porridge splattering like lumpy brain matter across the walls, because I lay awake the entire night counting each one of his snores in the hope that it would act as some stupid lullaby and eventually, for the first time in almost twelve months, shut my eyes and feel human once again.

She won’t stop until I go into her. I know this now. Those people who tell you to leave a baby to cry must have all had a woman lying awake in bed beside them, to slip out of the sheets and shush it back to sleep with a frantic sh sh sh, holding it and swinging it in her arms, side to side like a ship pummelling through waves. I stop shuffling and stare, his lips parted slightly, stale hot breath, a tinge of stubborn onion and garlic that toothpaste can’t mask. I think about waking him up and just asking him

would you mind this time, please?

And I know he would do it. He would get out of bed and kiss my forehead and say yes of course

and pad across the floor in his boxers that are now far too small and he would pick her up from her cot and she would fall back asleep in her daddy’s arms and he would put her back and slide into the bed beside me as if it was no hassle and I will smell her on him then.

Her soft, chalky, sour smell that is so delicious I want to cry.

But I do not want to have to ask because I am never asked and I just do. I could not bear to hear the sickly cooing when he tells them that

yes, I often settle her at night. I actually love doing it.

would she not be doing that herself?

I wonder whether I hate him or is it that I hate everyone. I throw the duvet off myself and expose my legs, the light pink cotton nightdress, the only pyjama clothing I am comfortable in, has ridden up to my hips and curly black hairs poke out from my baggy knickers and little stubs are rising like blades of cut grass along my shins because I cannot bring myself to groom continuously and at the same speed at which my hair appears to flourish. And as I pull at one of the hairs peeking out of my pants until I feel it pull the skin I wonder whether the only thing I am good for is growing things and then I think that I do not care and that it’s only hair and I feel like I have realised the punchline to some joke before anyone else has gotten there.

She is still wailing. Red, raw wehs from the back of her throat that should not be able to come from something that small. I sleep on the inside of the bed so I have to slide to the bottom of the mattress to get out and his feet skim past the side of my thigh as I walk across the room.  A sharp, uncut nail and freezing skin. He continues to sleep. I thump heavily across the room, its soft carpet that I now regret and wish we had kept the creaky wooden floors that at least acknowledged you moving above them, and I go into her room, the small box room that had previously been the study. Her cot pushed against the wall and an assortment of soft toys scattered on the floor, and for some reason the swivel office chair that neither of us had yet removed and I think was beginning to become a point of something between us.

Sensing me in the room and her wehs get weaker and less guttural like she thinks she has maybe achieved something but at the same time doesn’t want to jinx it. I go to her in the cot and look over the railing and she stops. Her putty legs and arms all reaching in the air towards me that contort her into some kind of distressed cockroach. I lift her out, her flesh moves, soft and malleable, not having yet decided where it will fuse and stretch. I hold her tight to my chest, one hand under her bum like I was shown how. She gurgles happily and I can’t decide whether I am annoyed or glad or what. I sit down on the swivel chair and readjust her so that she is looking up at me now and I swing around in circles in the chair and it makes her laugh and I laugh and I keep doing it even though it is not yet even four in the morning and I am so, so shattered.

We stop and sit still and she begins to whimper softly again and I know she is hungry. I pull the cooler bag from under the cot with my foot and drag it towards me to take a bottle of formula out. I hold the bottle to her lips and she suckles and guzzles, making little baby noises and I click my tongue on the roof of my mouth because I think it will sound the same but it doesn’t. I want to pull her to my chest, be close to her again in that way that only we could do and feel her soft little mouth latch on to my nipple and have her find all that goodness that apparently is in me. But then the doctor is telling me

You’re not doing it right

And me thinking then that I thought it just happened and the doctor raising an eyebrow like I’m some fuckin eejit because I thought I just did it and that it was something that was done and instead it left my skin taut and clogged like the pores on a teenager’s nose, milk turning to puss, ballooning to a size that would have been comical if it hadn’t been so blindingly painful.  But I wasn’t doing it right, this thing that I was made to do and left me lying in bed with damp, warm flannels draped across me in a melodramatic fashion; and I thought about all the times I had been admired for my tits and now I think what kinds of words we use for these lumps of flesh hanging off of our chests: tits; boobs; bosom; rack; breast – and all of them seem depressingly embarrassing to say and also wrong and not quite right and maybe kind of funny.  I think maybe then that I can be both glad and sad at the same time, that I can feel those things at the same time and that maybe I can hate and love her, hate and love him and everyone, all at once. Her baby noises stop and she’s finished so I put the bottle on the floor, cradling her in the crook of my arm, and I look at her and for a moment that’s long I wonder actually whether I am just looking at myself, this little thing, because what else is she right now but me, and my brain feels shaky and my eyes sort of quiver and I think that maybe I’m going mad but she gurgles again and opens and closes her lips like a goldfish.

I hold her up against me, rubbing her back gently, up and down in soft circular motions until she falls asleep and I sit there moving carefully in the chair so that I am rocking and soothing myself now and I look around the room and I think that this is it, this is the end of the earth, the entire universe and all its matter right here.

Maebh is from Dublin but has recently relocated to Brussels where she continues to write in her spare time and as a way of making sense of her various thoughts and moods. She graduated from UCD in 2016 with a BA English and is in her twenties