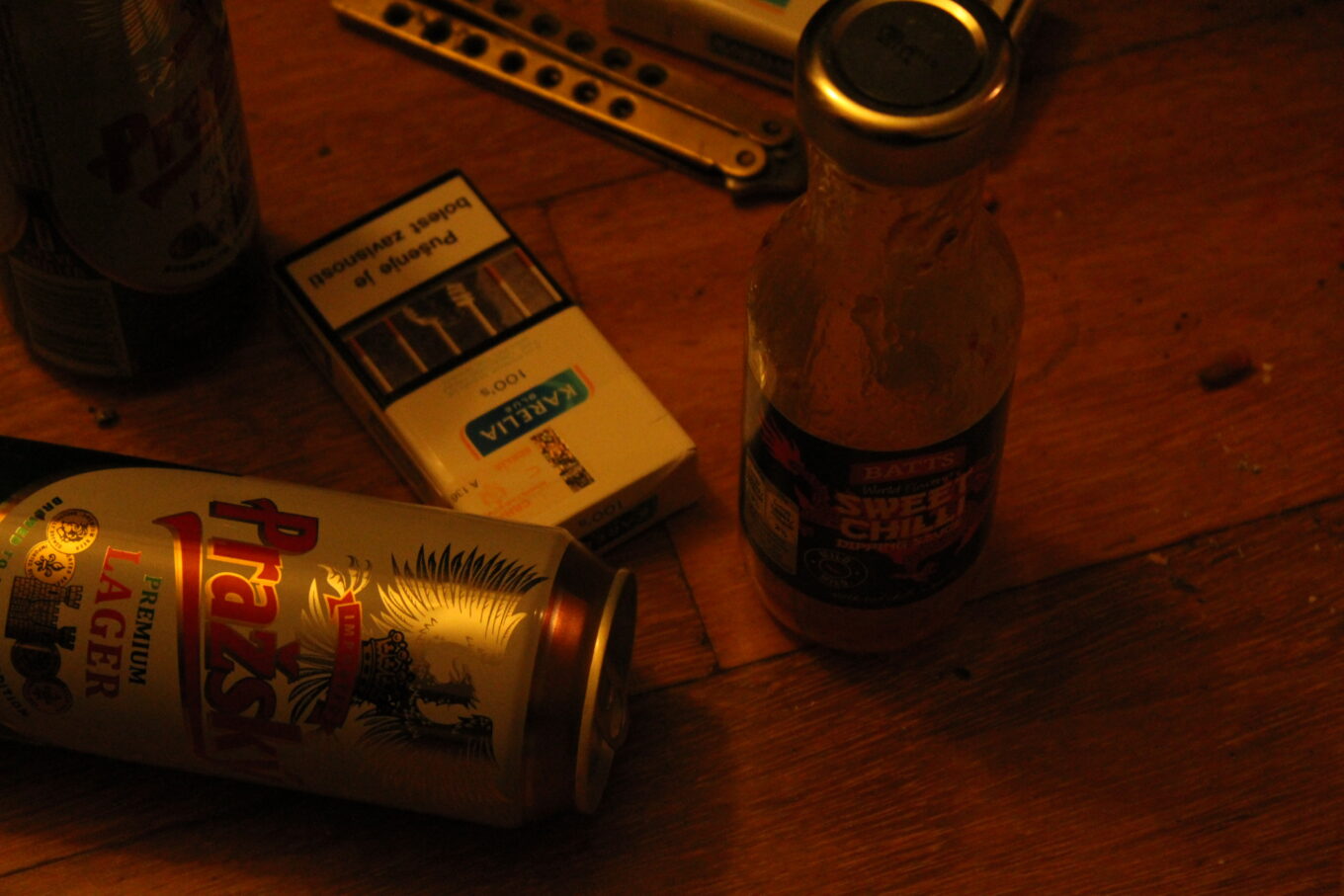 He pulled his lips off my throat but left his hand on my balls. Looping the other arm around my shoulders, he pulled me towards his mouth and shouted over the music, “Wanna get another drink?”

The hot skin of his forearm felt like smooth glue against the back of my neck as we jumped haphazardly to the pulse of the music. “I actually really want a fag,” I bellowed in response and pretended to blow smoke onto his lips.

He laughed and did the same, leant in for a kiss, and concluded,  “Alright.”

I grabbed his hand and pulled him through the swaying thicket of wet t-shirts and naked torsos, bodies hairless and glossy with sweat, stepping between wayward feet and weightless hands. In the flashing darkness a sea of grinning faces, reflective discs of shiny skin housing eyes polished by strobe lights. They were perched ecstatically atop lithe jumping forms, abstracted by the slippery humidity.

As we fumbled through blackness detonating with sparks of blue neon, I felt the  friendly pass-over of a stranger’s hand on my thigh. Turning to find the hand’s owner, I only caught the pink flash of teeth as the face emerged and expired in a flair of tremulous light.

At the edge of the room stood a narrow doorway, opening onto a thin stairway of splintered, uneven steps. Protesting under every footfall with the belligerent screaming of mouldy wood, they lead to a terrace covered by a low awning. It was littered with half-empty glasses and the fuzzy excerpts of conversation that twisted into one another like velcro fibres. Against the wall two couples made out with one another as if competing, the fluffy-haired 20-somethings trying their hardest to outdo the stubble-jawed 45-year-olds.

It was all very wonderful.

Kieren and I positioned ourselves by the doorway, beneath two spot lamps that splashed gritty white light across the deck. It was warmest here, an agreeable balance between the gooey heat of the airless club and the sobering liquidity of the outside world.

I had leant against the wall and folded my arms, rocking the back of my head  onto the wall. “Bleurgh,” I said.

Observing the flamboyant drunkenness ahead of me, I saw Kieren cock his  head at the edge of my peripheral vision; I imagined his eyes narrowing. “I’m hot,” I clarified.

Kieren took a step forward and squared himself against me on the wall. Our shoulders were parallel, though mine were higher and wider, being a few inches taller than him. He wiggled his shoes against the edge of my feet and pushed them apart, spreading my legs. He tipped his hips into mine and pressed his erection into my groin, pushing up against my balls. There was little pressure needed for his tongue to enter my mouth, as it was welcomed without protest.

I slid my hand up his shirt and spread my fingers across his lower back, bringing his body tightly against my chest until I was pinned to the wall. I grabbed Kieren’s hips and pulled him up to me.

It was after I felt his tongue discover the gum in my mouth that he asked if I had any pieces left.

I split my mouth open in a silly grin, presenting a thoroughly masticated piece between my teeth.

We were both high at this point but I had come up sooner, and stronger, so I’d needed the gum before he had to counteract the spasmodic chewing that follows nasal ingestion of MDMA. Besides, I had divvied more mandy for myself seeing as I was the one who bought it in the first place.

Kieren was nevertheless very grateful for what he’d been given, as it was  always nice to receive free drugs from strangers.

“So then,” I said, poising the tip of my nose against his, “how are we feeling now?”

Kieren shut his eyes for a moment and the quiet smile at the bottom of his shaven heart-shaped face grew into a clumsy ear-to-ear grin. He tipped his head back and inhaled deeply, puffing his cheeks up as he breathed out through his lips in a thin whistle. He slowly rolled his head forward again and dropped it against my chest, bouncing on his toes as he drew his fingers through my hair.

“That feels really soft now, doesn’t it?” I asked, laughing softly as I watched  Kieren wriggle in the throes of ecstasy.

“It does, yeah — feels fucking amazing.”

He quickly flipped his face up to mine and kissed me again, pulling my face toward his own, where clamped his lips on mine and instantly released himself, flying down to my neck again. The slippery warmth of his tongue made me laugh so loudly I saw two heads spin toward us, the older couple I’d spotted earlier, and while I didn’t catch their expressions the gesture was sufficiently cautionary.

“Okey doke,” I said, gently pushing his shoulders away from me. “Let’s just let  that one sink in a little. I take it you’ve done drugs before, yeah?” Kieren shrugged, fiddled with his hair. The novelty of heightened sensory stimulation had only just started to kick in. At least he was playing with his hair now. “I mean, yeah,” he said, “but like just weed and stuff — oh, I did acid once, but I’ve never really snorted anything.”

“Aha,” I said. “Well you seemed pretty keen on this when I was cutting you a line in the toilet. I mean, I did tell you what we’d be having before we took it — like, you know this isn’t just mandy, right?”

Kieren made a dismissive pfft noise and giggled through his teeth. He was still bouncing on his toes, only now his wrists had begun to join in. He looked as though he were conducting an invisible orchestra as he admitted, “I wasn’t really paying attention, to be fair. Like, I’m not gonna lie, I was too busy looking at you.

Kieren replaced his hands around the back of my neck, tapping some mysterious tempo along my spine.

I kissed his nose and laced my own hands around his neck. “Well that’s very  sweet of you, Kieren. Cheers.”

“But on a serious note, let me tell what you had. I brought it home with me on a trip  to Rotterdam — I actually managed to stuff it into a pair of socks at the bottom of my suitcase, which I thought was very clever — but it’s apparently a ‘designer drug,’ which is some special mix of coke and MDMA. I didn’t think too much of it, really, as it just felt like normal mandy but you feel more alert than euphoric. So you’ll be getting quite a kick off it, but I only gave you a little bit as I didn’t think you’d need  that much.”

“Okay,” Kieren said, quizzically bopping his head from side to side. He  laughed and looked up at me. “We’ll see how we go.”

“Yes, we will.” I noticed his jaw quivering. “Oh shit, I forgot — chewing gum.” I fished a pack out of my pocket.

Kieren obligingly unrolled his tongue and I gave him two pieces. “Right, gnash  away on those before you start gurning. Just chew consistently but don’t go nuts, otherwise your jaw will ache like a real fucker in the morning.”

Looking over Kieren’s head, I saw the older couple had dislodged themselves from the wall at the back and, exhaling one final jet of cigarette smoke, were starting to head back inside. As they approached the door, the shorter one locked eyes with me: they were totally black, shadowed by heavy eyebrows, the irises fully expanded to catch any illumination it could on this ill-lit deck. He had shaved sides and a packet of densely compacted brown curls at the top of his forehead; there were shallow acne scars on his cheeks and a jaw you could crack eggs on.

He didn’t smile but nodded at myself and Kieren with what I gauged as polite interest, a silent acknowledgement that we had attracted the right kind of attention. “Did he just eye-fuck you?” Kieren asked as they squeaked down the stairs. “Nah. Probably. Anyway,” I said, unbuttoning my jacket pocket, “I’d rather fuck  you.”

Kieren watched me as I pulled out the packet of fags, his eyes flitting between  the short flare of lighter flame and my lips pursed around the butt of the cigarette. “I’d prefer that, too,” he said.

A puff of smoke, head tipped up. “Cool.”

Kieren held my hips and blinked at me with the same purposeful flutter of a  camera shutter opening and closing. “It is, yeah. Correct, as you would say.” I slid a fag between his lips and lit it. The amber glow sparkled in ecstatic  detail, every burning fibre of tobacco ablaze with warm colour as the artificial energy  of the drugs made my blood tingle and fingers dance. I closed my eyes briefly,  dropped my head and swayed to the dull thump of music radiating from the dancefloor below.

I was coming up again, a second wave. I was rising higher, heart jumping, feet buzzing, my head a-crackle with light and sound — a need to dance, a surge to move, I was a sparkling glistening conduction rod of hot energy, a lightning bolt dressed in split-knee jeans and a Keith Haring t-shirt.

“Wanna go back inside?”

Kieren beamed at me, his eyes the size of coins. “Abso-fucking-lutely.” I took his hand and thundered into the misty ecstasy below, two steps at a time.

Born in Western Australia, Liam Heitmann-Ryce is a 23-year-old Creative Writing graduate currently residing in the southwest of England. He is dedicated to platforming LGBT+ voices and queer experiences through his stories and interview features. Outside of his writing practice, he has passionate interests in classical music and wishes to one day work for a symphony orchestra.